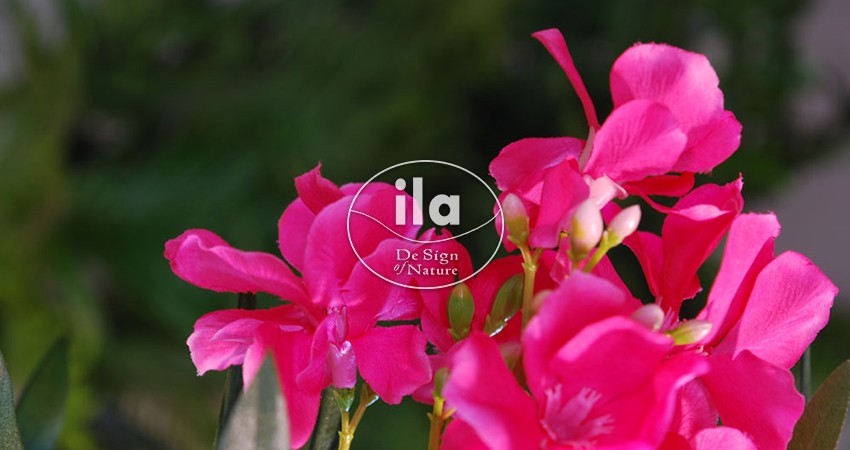 Oleander is the official flower of the city of Hiroshima (Japan). It was the first plant to grow after the atomic bombing of 1945.

Oleander (Nerium Oleander) is an evergreen shrub belonging to the family of Apocynaceae; it is often found in European houses: in garden and terraces and it is famous for its ornamental function and its beautiful pink flower. In Nature it is most commonly grown in the Mediterranean.

The flowers arrive in summer and at the end of autumn in an astonishing range of colours: purple, white, yellow, orange and pink, according to the different varieties of the tree.
The natural Oleander is also notorious for its toxicity, whereas it is less famous for its therapeutic powers. As a matter of fact, many scientific studies are investigating the importance of N. Oleander as a possible treatment for Cancer.

Ila’s semi-natural Oleander trees are non-toxic :-)
The variety here proposed is lanceolate, with beautiful vivid pink flowers.
For centuries this beautiful flower has sparked the imagination of poets and painters.
To their art and to the art of Nature we drew inspiration to create our astonishing Semi-Natural Oleander.

Jasmine and the Power of an Earth’s Caress

“True love is night jasmine, a diamond in da...

Smart solutions for your spaces ila has always be...

A "Florida" collection The exquisite elegance of...

We are happy to inform you that ila staff is back...